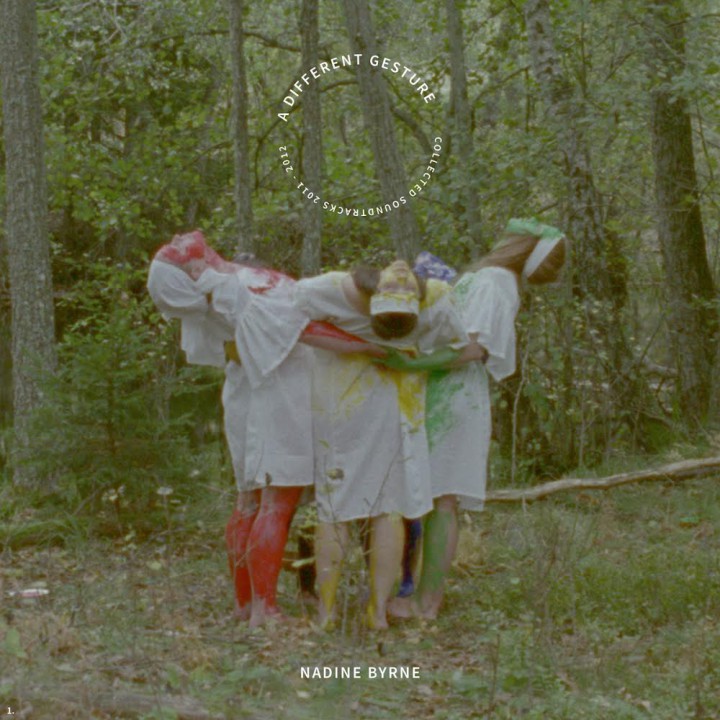 Released in 250 copies on iDEAL Recordings.

Nadine Byrne: piercing the veils
”For nature, as we know, is at once without and within us. Art is the mirror at the interface. So too is ritual; so also myth.” (Joseph Campbell, The Inner Reaches of Outer Space)
Immediate nostalgia lurks beneath the celluloid surface. This is but one luciferian surface among many in Nadine’s serene soul searching, enchanting the viewers/listeners/partakers with flashes and rays of emotional debris. Her surfaces are never filtered, as in ”technologically recreated” but rather tangibly nostalgic for a time almost forgotten – were it not for her hypnagogic ability to (re)create poems out of these shared dream fractions. Can we be genuinely affected by a temporal esthetic that we have never experienced in our own life or in our own formating stages? Of course we can.
Rough, warm, blurry, scratched, organic, soft, slow, sensual… Setting aside all our critical fuckulties to promote an open void embracing heated wonder-lust. The symphony of pauses generates a psychic psynchopation and we swing helplessly between being a child’s kite and a folded emblem containing an elemental pentagram, tucked snugly into the snow of deep sleep. The facets of life evolve as we live it.
The elements proper are the elements of Nadine’s creations, of her interpreting complex inner spheres with a little help from the Dream Family goddesses-priestesses. Elemental integration through fabric and sheer veils. Elemental integration through hands and bodies. Veils are seductive, suggestively displaying what lies beyond. How pure… Is the vision? Ask the witches. The witches pierce yet another veil: the surface of the water that swallows them whole. The fabric remains on the surface while the women are submerged. A material ghost gently rocking while life moves on in other dimensions. To be submerged in the mysteries indicates immersion in the truth. One can never know unless one’s been there. Returning to the mother once again and leaving traces of our frail existential clothing behind. Implying nudity and implying death – both states also indicative of new life, a new kind of birth. Ergo: the witches know how to give birth to themselves but only share/convey/communicate on their own terms. Sorry, no peeping… It all happens beneath the surface. That’s how it should be.
The energetic fortissimo of a playful piano weaves another kind of hypnotic spell. A surface in yet another sphere, with faint multitimbral voices from the supreme witch herself luring you into an intricate web of wonder. Do we have the courage to succumb? Are we stuck in a theme or just being prepared for initiation into the next phase? A question for life in general as much as for art in this specific sense. The sticks and stones that may break our bones are the same ones that we can see in Nadine’s films as tools of transformation. No reward without sacrifice – willing or unwilling.
As in Nadine’s films, seasons change but the elements remain. Each has its given moment in the cycle and each cycle becomes an element in itself on a larger scale. Individuals fade. Work is constant. Destinies die. Life moves on. Whether the perspective is high as a kite on a beautiful and chilly autumn day or looking up at a rocky paradise on distant sunny shores or zoomed in on flowers picked to dye (as opposed to die) magical garments, we are fixed in the middle. Nadine’s universe swirls around us. We can catch a glimpse if we’re privileged but that’s all. Fractions are displayed, fractions are remembered. What we perceived as a surface was in fact only a pattern of translucent carriages, each containing a wish and a dream, bound together by the very same cord we see wrapped around her dream-stones occasionally.
Is this occultism or paganism or some other cosmic ism that we see in Nadine’s films? Perhaps. Perhaps not. Our minds always fill in the voids and we concoct necessary compensations based on each others’ stimuli, to suit our own mythmaking or our own frustrated soul-peeling. What always remains is the intuitive approach to eternal mysteries, rooted in nature, sex and interpretation. There is witchcraft embedded in each visual frame, each sound, each voice and in each word. As we watch, listen and take part, we are synaptically zapped by intense Dream Family poetry… And then wake up as slightly better human beings. Thank you.
Carl Abrahamsson